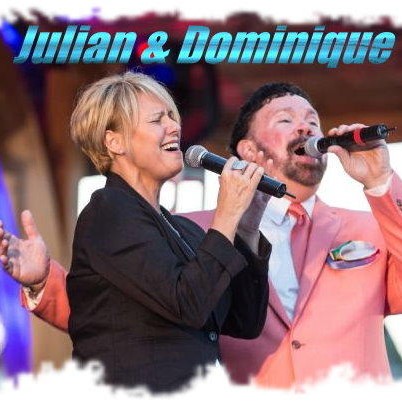 The dynamic duo of Julian and Dominique, known as the show of 1,000 voices, sing everything from Celine Dion and Whitney Houston to Andrea Bocelli and Barry White. Together, Julian and Dominique have formed a diversified act that has performed throughout the United States, and separately, each vocalist is known to bring something extraordinary to the stage. Julian has performed locally and regionally in clubs and restaurants, where he impersonates some of the world’s most famous musicians, including Pavarotti, Elvis, Sinatra, Willie Nelson and Luther Vandross, to name a few. Julian’s voice can be heard on radio and television in ads for American Airlines, Pontiac, Ford and Burger King. His partner Dominique, a native Canadian, grew up in Quebec City and toured with different show bands, playing covers and originals, across Canada. Since moving to the U.S. in 1994, she has worked with several local bands in New York & New Jersey, performing at weddings, concerts and corporate functions. She has also contributed to several commercial recordings back in Canada as a lead and background vocalist.
It’s a show you will never forget…………………….