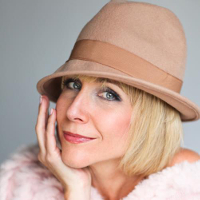 Ms. Calvert is best known for originating her role in the Tony nominated It Ain’t Nothin’ But The Blues on Broadway where she co-starred with Grammy nominated Gregory Porter. Calvert’s extensive credits, including a European tour of Smokey Joe’s Cafe, and the lead role of Grizabella in the Broadway national tour of Cats have given her the foundation of countless hours performing, touring and molding her voice into the powerful instrument it is today. Her transition into the jazz genre as a singular artist is already being met with critical praise. Backing Ms. Calvert is The Roger Cohen Trio, featuring pianist Jim West, bassist Brian Glassman and drummer Roger Cohen of whom Modern Drummer Magazine stated, “Roger’s playing reveals an admirable combination of power, musical creativity and restraint.” The trio supports Calvert with maturity and originality and through masterful arrangements brings this exquisite vocalist’s full bodied range and unique articulation of jazz styles to light. Their superb musicianship is captivating and memorable. Rarely does music making happen on this level. Carter Calvert and The Roger Cohen Trio become a singular collaboration of exciting rhythms and sounds in support of the album’s diverse songs.