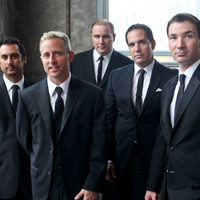 The Touch is a five-piece band that has kept dance floors packed for almost 30 years, and have proven themselves to be the band of choice for weddings, corporations and fans of all ages at venues throughout the Northeast. Known for spot-on, faithful renditions of songs from the 40s to current chart-toppers; From Country to New Wave to Hip-Hop, to Top 40; From Sinatra to Michael Jackson to today’s most popular artists, The Touch has cemented its reputation as one of the best cover-bands ever to come out of the tri-state area. This explains why they were chosen as one of the top wedding bands in the country by participating vendors in Modern Bride magazine, and for the past four years, have been the entertainment for Rachael Ray’s Burger Bash. Throw in two of those four years as the band for Guy Fieri’s closing party for the Food Network’s NYC Wine & Food Festival, and being the de facto band for Fordham University’s annual Senior/Parent Dance, it’s clear why The Touch has a reputation for knocking fans and clients of all ages out of their seats and onto the dance floor.