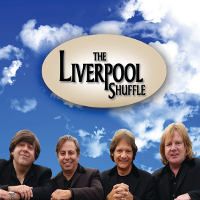 Originally formed in 2003 by Joe Refano, and 2008 and again in 2014, THE LIVERPOOL SHUFFLE brings together veterans of the New York Music Scene with a combined 180 years of musical experience between them. They are all avowed BEATLEMANIACS and it shows! They provide a LIVE Beatle show with the emphasis on THE MUSIC. They attempt to play it LIVE the way The Beatles did. No tricks, no tracks, nothing pre-recorded. They play and sing the music LIVE.