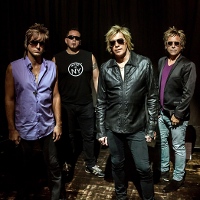 Slippery When Wet has played to many packed houses throughout the Southeast and has quickly become the top draw at many of their regularly scheduled clubs. The bands shows are the most attended and highest grossing of any Bon Jovi Tribute in the country. In 2007 the band was officially authorized by Bon Jovi to perform their highly entertaining show. Their drive, musical ability, showmanship and dedication to duplicating the Bon Jovi live experience simply cannot be outdone.