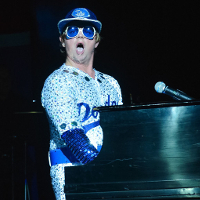 As featured @ BB King’s Clubs, House Of Blues, Hard Rock Live, and endorsed by ‘Hercules – The Elton John Fanclub’, The Rocket Man Band is the USA’s #1 full-time 70’s & 80’s Elton John Tribute and sets the standard for world-class entertainment. Rocket Man is the biggest, most flamboyant Elton tribute in the USA. The show is a re-enactment of an early Elton John concert featuring some costumes that were owned by Elton, 100% live instruments and vocals, and all the classic onstage antics.