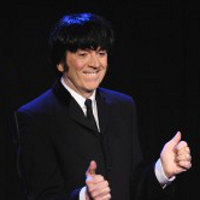 In a brilliant one-man Beatlemania-esque show, Bob Halligan Jr portrays Paul McCartney through his career as a FAB. Paul has a conversation with the audience- and himself- that inevitably leads back to the songs we so deeply love. Early on, he receives a visit from John Lennon, who asserts his “creative dominance” of the group. Through the laughter and the tears (and the clothes), Paul traces the band’s musical journey and his particular contributions to it, doing so with no backing tracks or help from off/onstage musicians. As group unity frays, he begins to muse about where he might go musically after the break-up. And he even takes requests! The audience participates, and the songs and the man remind us that FAB never goes out of style.