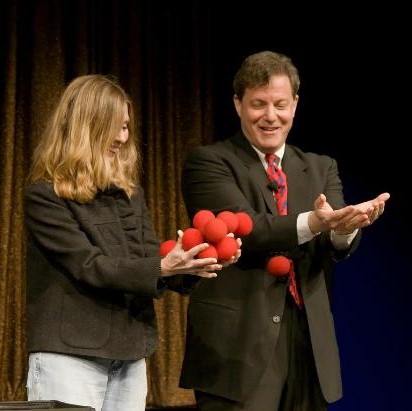 MICHAEL CHAUT is a seasoned professional magician who has captivated audiences for over 25 years at places like: The Rainbow Room, The Copacabana, Feinstein’s at the Loews Regency, The Waldorf Astoria, the Greenwich Village Cabaret called Mostly Magic and now regularly, New York’s Off-Broadway sensation, Monday Night Magic. He started performing magic at the young age of eight years old and is now a performing member of the prestigious ‘Magic Castle’ in Los Angeles and entertaining many notable celebrities. Michael has showcased his miracles on cruise ships and at conventions, tradeshows and corporate events, as well as on television. His rare blend of comedy and magic make for a good time to be had by all. Michael is an entertainer who has literally charmed audiences worldwide. In countries where English wasn’t spoken, magic was used to communicate. Besides comedy magic, Michael specializes in corporate magic, close-up magic, and mentalism. Today he regularly appears all over the United States and around the world.