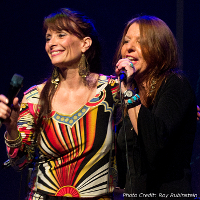 Love is a Rose

Celebrating the music of Linda Ronstadt

Linda Ronstadt’s multi-platinum career made her the original undisputed “Queen of Country Rock” in the 1970s, and by the end of 1978 she was the first-ever woman to sell out a stadium/arena tour and the highest-paid woman in rock music. Her golden voice has recently been silenced by Parkinson’s Disease, but audiences once again have a chance to enjoy her iconic hits in “LOVE IS A ROSE: Celebrating the Music of Linda Ronstadt.” In this sensational act, Paula Hanke and Peggy Ratusz belt out song after song while adding personal stories and historic accounts of Ms. Ronstadt’s impressive achievements. This charismatic duo comes together following diverse solo careers: Hanke as a performer on TV’s “Star Search” and casino showroom-headliner, and Ratusz as a two-time semifinalist in the International Blues Challenge and opening act for The Beach Boys. Filled with hits from Linda Ronstadt’s eclectic 28-studio-album catalog, LOVE IS A ROSE takes audiences on an exciting journey through the worlds of rock, pop, country rock, Latin, folk and jazz standards in a heart-filling and soul-thrilling concert event.