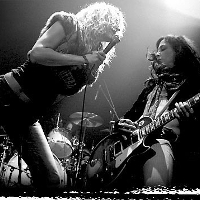 LEZ ZEPPELIN, the New York City-based all-girl band has gained worldwide critical acclaim for the musicianship, passion and gender-bending audacity they bring to the music of Led Zeppelin.
Founded in 2004 by New York guitarist, Steph Paynes, It wasn’t long before the group’s reputation for playing Zeppelin’s music with a kind of passion and force beyond anyone’s expectations began to attract major interest from press and the industry. In June, 2005, Chuck Klosterman wrote an article for SPIN magazine that featured Lez Zeppelin as a leading protagonist in a trend of all-female hard rock “tribute” bands. He referred to the group “the most powerful all-female band in rock history” and described the rise of bands like Lez Zeppelin as a “kind of multilayered cultural phenomenon.” The fortunes and notoriety of the group surged after this and Lez Zeppelin became provocative subject for the news media across the world. Stories about the group appeared in the Times of London, whose journalist called the band “the best new band I’ve seen all year, no question;” Reuters and CNN.com, which ran a front page feature that called the group so “electrifying” they are “driving club audiences to a frenzy.” The group also appeared as part of a major feature on CBS Good Morning, which ran nation-wide, as well as on many other local TV news spots in New York (ABC, WB) and across the country.