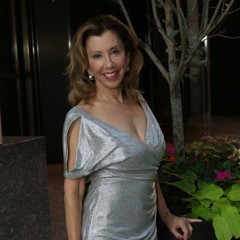 Judi Mark was born in Chicago to a musical family who encouraged her to express herself creatively. Her dynamic range of training included ballet, modern dance, jazz, tap, acting, vocals and piano which set the stage for a successful performance career spanning over decades. She has appeared on concert stage, regional theater, cabaret, and the high seas. While studying acting with Bill Hickey, she performed in Off-Broadway productions, film and television. Her vocal studies with many world-renowned professionals based in NYC prepared her for work at dinner theaters, cabarets and distinguished venues such as The Algonquin, The National Arts Club and The Triad. Performer/Producer Judi Mark has passionately written three one woman shows, ‘Judi Mark: Dancing Through Life’…. singing songs made famous by the ladies who danced…a tribute to Miller, Miranda, MacLaine, McKechnie and more! ‘I Feel a Song Coming On’, is a tribute to old Broadway and Hollywood nostalgia and most recently, ‘Laughing Through Life’ featuring comedic backstage stories with song and dance. If you are interested in a stylish cabaret that is more chic than posh, and more glitz than flash, then Judi is your gal. Her tributes to Old Broadway & Hollywood are sure to delight!