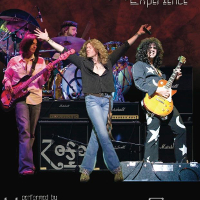 Hammer of the Gods

Hammer of the Gods, The Led Zeppelin Experience is an international touring act recreating the excitement of Led Zeppelin’s legendary live concerts of the early 1970’s. Hammer of the Gods has entertained tens of thousands since 2000 with their professionally produced theatrical performance featuring period costumes, authentic equipment, staging and spectacular light and sound systems.  It’s a multimedia extravaganza.

Considered by many to be “The Ultimate Led Zeppelin experience” Come see the show, hear the music, and discover the story behind the music of the greatest rock band ever in this two hour multi-media retrospective of Led Zeppelin with selections from every album! The New York Times says, “It’s a hot ticket!”