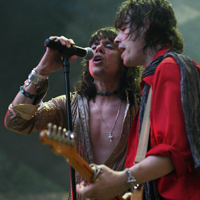 The Rolling Stones single handedly changed the way rock concerts were presented to large audiences when they kicked off their ’69 U.S. Tour which is thoroughly documented in the movie ‘Gimme Shelter’. By combining the raw energy of the band with the more sophisticated amplification systems for the times, The Stones were able to connect with their mass audiences in sold-out arenas on a whole new level. The Glimmer Twins will give you a close-up view and feeling of what it was like to be in the audience at one of these historical performances.
By 1972 their live performances were creating such frenzy, that many venues needed to utilize a lottery system in order to fairly distribute tickets because of the overwhelming demand. In subsequent years, the audiences kept increasing in size to the point where The Stones were selling out stadiums across the world. Everyone wanted to experience the sensation of seeing The Rolling Stones perform. What makes The Glimmer Twins such a special attraction is their ability to capture the raw energy of the most electrifying performances throughout The Rolling Stones career, and present it in such a way that audiences are able to experience the same sensation of what it was like to be at a Stones concert in their heyday. Because of the uncanny resemblances to Mick Jagger & Keith Richards in their prime coupled with the special attention given to the minutest details both musically and visually, The Glimmer Twins deliver a Classic Rolling Stones Experience to their audience.