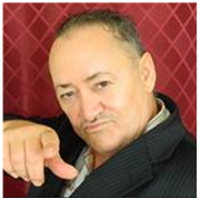 ANGEL SALAZAR is a Cuban-American comedian who is well known for his role as “Chi Chi” in Scarface. Since then he has appeared in Carlito’s Way, Punchline, Last Comic Standing and The Latin Legends of Comedy. Salazar’s brash, hilariously offensive act combines stand-up, improv, props and costumes, lining his punchlines with his catchphrase, “Sheck it out!”